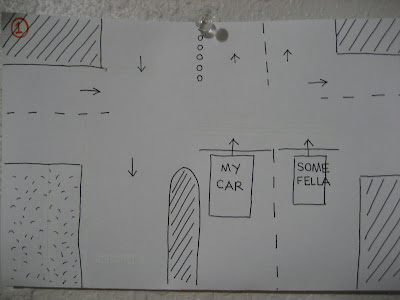 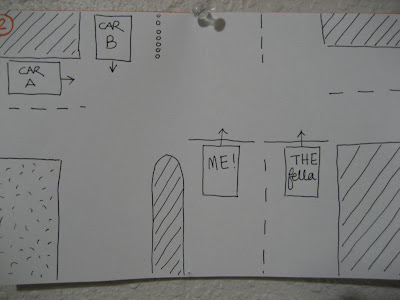 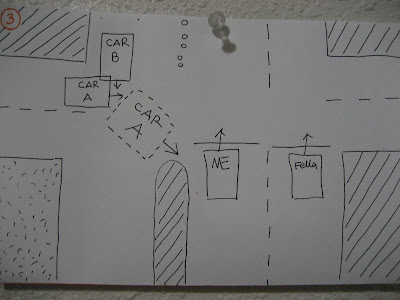 this was what happened to me yesterday night. first, let me explain each picture in detail..
picture 1 : see. i was the first car. together with another car on my right hand side, waiting for the red light. as i waited, i was shivering in the cold and grooving to the music on the radio. anyway, the arrows indicate the direction of flow of the traffic. those striped area indicates pavement of somekind. and this T-junction is close by one another, being that one junction to another junction is not far and wide apart, its close and near-apart.
picture 2 : then, i saw a car coming from my opposite direction, driving just smoothly. and then, out of no where, i also see a car coming from the other direction, on my left, coming on at quite a speed. at that moment, i think of nothing, of course. still grooving, still shivering.
picture 3 : out of a sudden, without warning, i realised that both cars were not stopping. what made matter worst was, the 'striped area' between those car A and car B is a fly-over, thus, neither car can see each other. then in about 2 seconds later, both the cars did not stop, BAM!SMASH!SQUICKSQUAK! after bamsmashsquicksquak...in that split of .5 seconds, because of the impact, car A changed direction, and because it was travelling at quite a speed, it lost control after colliding with car B, and changed direction going towards me. at that angle (in broken lines), drawn above.
at that moment, as i witness the whole bamsmashsquicksquak then the-car-losing-its-control-towards-me, i thought, madafaka, its gonna hit me! its so gonna gonna hit me. and i sit there helplessly on the driver's seat of the car. staring at car A.

my reflex was to turn my steering to the right, and, yes, i did so.

but at about just 3 meters shy of hitting me/my car. the driver managed to gain control of the car and turn towards the patch of grass. (as drawn)

the front of car B was as good as crumpled metal.

not long after, the lights turned green. i left but cars beside me, at the back of me all stayed, gasping in disbelief. i, on the other hand, tackled my shock by driving away...while still absorbing the shockness, and while the adrendaline rush in my blood cools off.

then as i reflash, you know what stupid faak i did? though, i turn my steering, it would not help anyhows, because my foot was still on the brakes. tight on the brakes. what the hell... now i know how anxiety and panic can cause a person to not react and think right.

O.o
*blink blink*
wish i was in the car beside you

omgush!jane your not the only one who almost die in an accident.i almost die two days ago!!and it all happened within 5 seconds!!Utar has these two gates:east n west.to get into east gate,we have to use the 'highway'(it's actually the old trong road).

so two days ago,i followed my fren's car to campus.then there was this HUGE metal barrel(notice the capital letters)right smack in the middle of the road!!and my fren was so gonna hit that barrel!!thank god my fren's reflex action was fast enough to avoid that HUGE barrel.otherwise,i'll be dead by now.

gosh.this is the closest i have come to an accident.my frens n i were screaming as we approached the barrel and i was thinking,"oh god!!we're gonna hit that barrel!!"and mind you,that barrel was 2 inches away from our car.

(*by the way, i just wanna point out, i expect you to vomit your heart out in this incident and not only scream. cause when you are in my car also you scream. and my car is the safest history has ever known!*)