finals of the aussy open 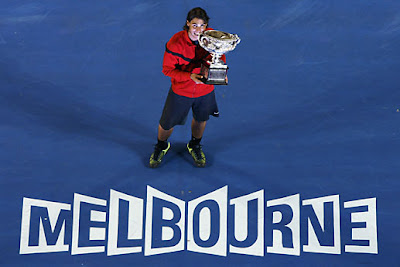 this picture says it all.
well, huge congratulations to Rafa.
it was an incredible match between Roger Federer and Rafael Nadal.

the repeat of the one of the greatest match played at the Wimbledon.

i stayed up till 7.30am in the morning to watch the match. though my eyelids were as heavy as elephants but it was worth every strength i used to open my eyes.

every point played were just brilliant and ingenious.

Roger played well, but Rafael outplayed him.
it was obvious that Rafael was so mentally stronger and had the believe that he could win against Roger. though Rafael was definately physically so beat up from his semi-final match against Verdasco.
Roger had doubt all over his face. it was obvious. very indecisive in shot making whereas Rafa had his game plan right on.
the third championship point came and gone too fast.

but anyway, i felt for Roger. he cried so bad. Roger is afterall, human. 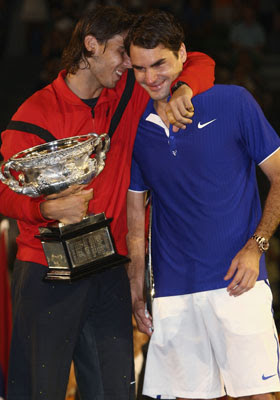 it was really touching how Rafa displayed a whole lot of humane and gave Roger the half hug and apologized for this win, though it was clearly no one's fault. 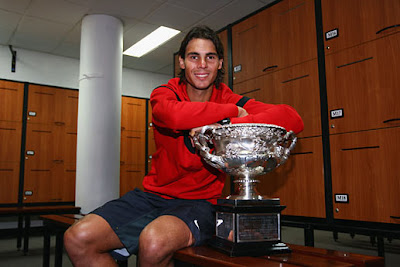